A project by: Raquel Bartra

This project received pledges on Wed 08 Jan 2020
Follow Become a helper
A regular guy, a sentient computer, and three scientists live and work in the first Mars-base

A short summary of MARTIANS

We are creating an exciting new television sitcom, Martians, in which we will go on a one-way mission to Mars. Joe, an ordinary guy, joins a crew of three eccentric astronauts - a determined second-in-command, a romantic systems engineer, and a stoner biologist - and a sentient computer. The sitcom follows their day-to-day as they are faced with different challenges.

A space comedy like Martians has never been done before. We want to challenge preconceptions on how scary it would be to colonise another planet, and instead explore how human relationships would be similar to the ones on Earth, but with the added hilarity of mundane horrors of living on Mars (such as tea never tasting the same or the lack of water to have regular showers!).

We are a group of third year Film and Television Production Students at the University of York, passionate about television.

We have some ambitious ideas in mind for creative this show, such as creating a miniature set for Mars (as it turns out getting there is quite costly) and designing ultra-futuristic sets and costumes. 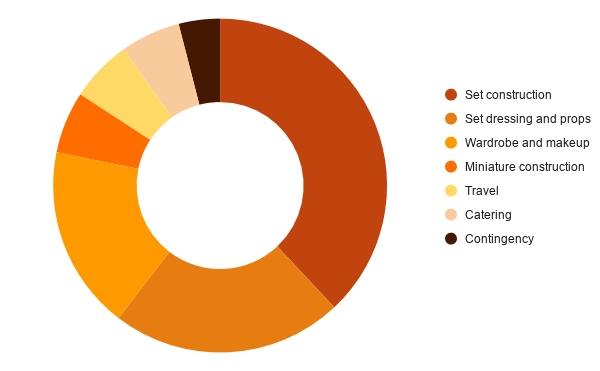 We will be building multiple sets from scratch. After all, no one wants a Mars-base without walls!

A large part of our budget will be going towards designing the show, as we will be creating elaborate, out-of-this-world sets. Your donation will go straight into buying furniture and props.

Our characters will be needing incredible costumes, hair, and makeup in order to become the futuristic icons we have in mind.

Unless the cost of travelling to Mars is significantly reduced in the next couple of months, we will need to build a miniature set of The Base to use in the show.

We’re not quite going to Mars (yet), but we will need to cover travel for our amazing actors and crew. This is where every little really helps.

We need to feed our cast and crew to keep them well and happy so that the show can be the best it can be.

In case we need some money for something we didn't anticipate.

If we have an excess, we will be using it to submit our show to screenings and festivals to maximise its reach.

We have some amazing rewards to thank everyone who donates, whatever the amount you might give. Check them out on the right!

Follow us on social media, where we will be posting regular updates on how the show is progressing, with behind the scenes and more exclusive content.

Please consider donating to our project. A little money can go a long way to helping us succeed. But you don't need to give money to help us succeed. Please share this project with anyone you think would support us. The more people who know about it, the more we are likely to make this sitcom possible.

Martians Sitcom
Your message has been sent.

Thank you, your report has been sent.
Martians Sitcom